Sorry for the long hiatus.  I’ve been vacationing in southern Afghanistan, and now that I’m back, I figured I’d share some of my meals.

So Bagram wasn’t terrible for the limited amount of time I was there. 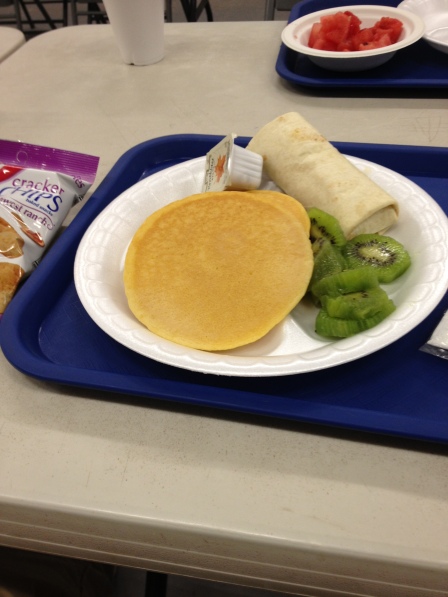 This healthy breakfast was had in Maiwand district, Kandahar province. 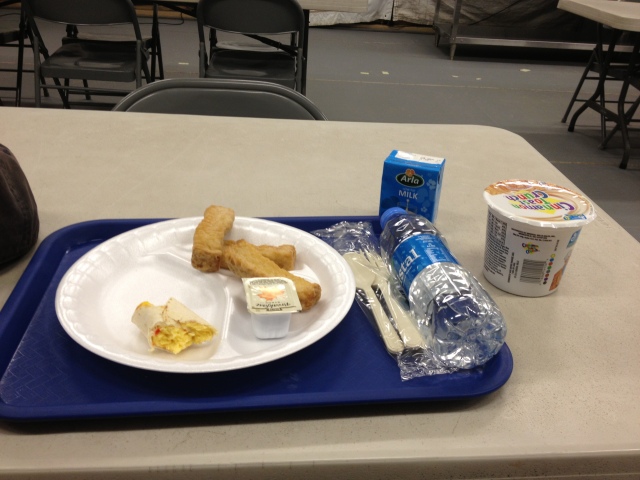 So Maiwand didn’t score too high.  Still better than MREs, though.

Solid Army meal of taco meat and spaghetti. The spaghetti was spiced up with something that gave it a more exotic flavor. Hopefully it wasn’t the moon dust in Panjwa’i district, Kandahar province.

I wasn’t in Panjwa’i as long as I wanted to be, but the food on some bases wasn’t bad.  One in particular had made-to-order burgers every other week.  The one I had (sadly, no pictures) had a chipotle aioli with grilled onions, mushrooms. and jalapenos.  After the long trip to get there, it was phenomenal.

The winner for best DFAC (that’s Dining FACility for the rest of you) has to go to a location in Spin Boldak.  Consistently good meals for the time I was there, with a great dessert bar.  I had a strawberry smoothie there one day.

It tasted better than it looked. Note my strawberry smoothie.at 1100.

Obviously though, anyone who makes sushi at a combat outpost will win this competition.  Yes, this actually happened.

The finished product. Simple, yet refined. The only sushi ever had at such a remote location? After 12 years of war…there are no firsts.

Tonight I’ll be having my first sushi since getting back.  I don’t know that I’ll appreciate it as much as I did with the sushi in Senjaray.  There’s something to be said for having a luxury like that out there…it becomes the best tasting thing you’ve ever had.

Other food that I had out there (besides all that wonderful DFAC food) included spicy chicken and lamb from a takeout joint in Kandahar City, some of the fantastic naan flat bread from Panjwa’i, Qabili Palao, and the cloyingly sweet chai (50/50 sugar-tea mix is how it usually tasted).

I’m glad to be back, and I’m looking forward to getting back into the food scene.  Suggestions welcome.