I go to a lot of these LivingSocial 918 F Street events, and when I do, I end up passing by a few restaurants.  District of Pi was one of those places.  After going to the course on Tiki Mixology with Jon Arroyo on Tuesday, I stopped in with a couple of people I met at the class.

Immediately our olfactory senses were bombarded with the mouth-watering smells of Pi’s main dish – pizza.  We jumped right in with an order of the Pi Bites (prosciutto and cheese sticks).  Cheese sticks are a guilty pleasure of mine, and these ones were tasty with the addition of the prosciutto (plus it was a small starter so I felt less bad about ordering them). 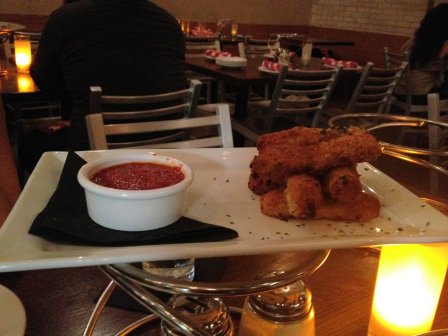 What I really wasn’t expecting was District of Pi’s creative cocktail menu.  As an example, I ordered the Papyrus, which consisted of lavender-infused tequila, Drambuie, orange, and Allagash Belgian-Style White…really tasty and complex beer cocktail. 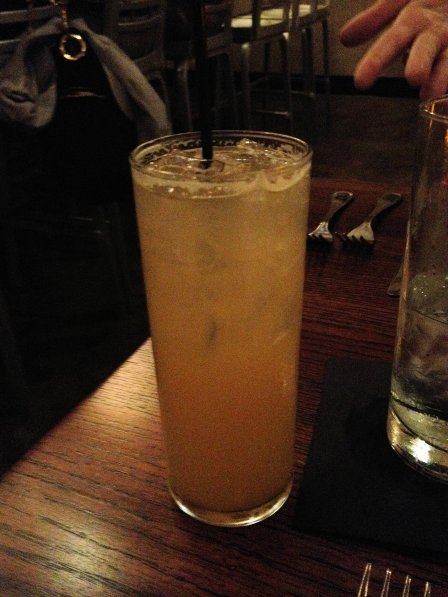 The pizza was really good.  I ordered a small 9″ (large is 12″) deep-dish pizza called the Kirkwood, which included mozzarella, italian pork and beef meatballs, red peppers, and basil.  District of Pi’s deep-dish pizzas are made with the cheese on the bottom, the rest of the ingredients, then the chunky tomato sauce on the top.  Our server, Stephen, said the Kirkwood was his favorite, and it did not disappoint.

My Kirkwood pizza. Thanks Stephen! There is a thin-crust pizza above and to the left for comparison.

District of Pi also has a ton of other ingredients you can add to your pizza, which you can find here.

I’ve also seen a District of Pi food truck driving around for the lunch crowds.  You can find the food truck menu here.

I’ve been negligent in hitting District pizza places, and I’ve heard great things about several of them (see here, here, and here for a few “best of” lists).  I’ll post about other ones as I hit them.

Tonight I put together a couple of beer cocktails from recipes I’ve obtained.

The first of these was a version of Black-White & Tiki, which I got hold of at a LivingSocial 918 F Street mixology course put on by Gina Chersevani (formerly of PS 7’s and now with Hank’s Oyster Bar, DC). 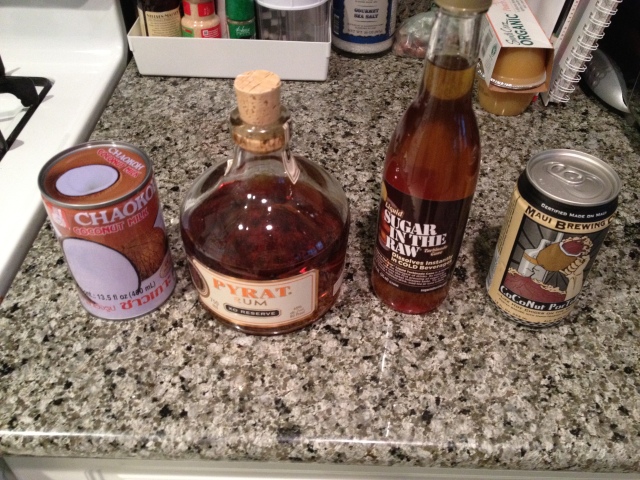 The ingredients for this version of the Black-White & Tiki…

Combine the rum, coconut milk, and sugarcane syrup, shake with ice until frothy.  Pour over crushed ice into a collins glass and top with the CoCoNut Porter.  Garnish with a pinch of cinnamon and serve with a straw.

I used Sugar in the Raw syrup and Pyrat rum for this rendition.  The cocktail comes out nice and chocolatey thanks to the beer…it’s like a beery mudslide, and quite tasty.

Next up was a drink I had at Mie & Yu in Georgetown called the “Gaarden of Babylon”.  The name comes from the use of Hoegaarden in the recipe.

My ingredients for the Gaarden of Babylon…

I wasn’t sure of the measurements for each of the ingredients, so I went with 1 oz St. Germain, 3/4 oz molasses (replacing blackstrap syrup), and juice from 1/2 a lemon.  Shook those ingredients vigorously with ice – especially important with molasses as it takes a bit for it to mix in.  Top off with the Hoegaarden.  Comes out as a nice, tangy beer cocktail.

If anyone is tracking on a beer cocktail that utilizes Duchesse de Bourgogne, let me know.