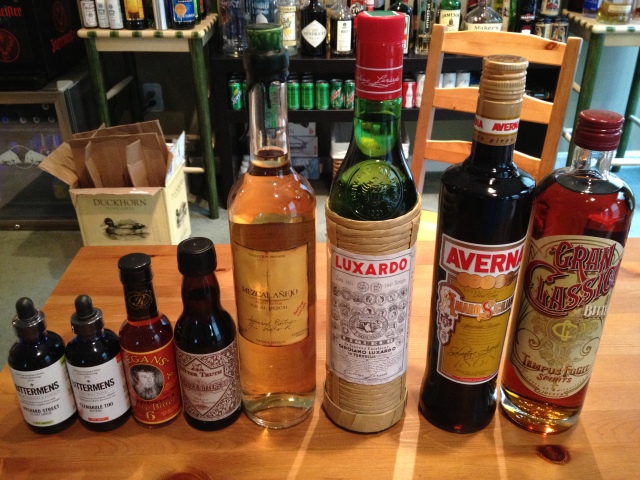 The latest additions to the collection, including a few more bitters.

Here are the latest additions…an extract, a few bitters, and some liqueurs.  Most of these acquisitions were chosen because of cocktails I’ve tried at The Passenger, so a hat tip to them.

Bittermens Orchard Street Celery Shrub – Celery, apples, and as it’s a shrub there’s vinegar as well (more on what shrubs are here).

Bittermens ‘Elemakule Tiki Bitters – I discovered this one in an unnamed cocktail at The Passenger that included Green Chartreuse, gin, aperitif wine, and said bitters…great cocktail.  I’m a fan of allspice dram, and the tiki bitters endeared themselves to me with their flavors of cinnamon, allspice, and other spices.  Besides “tiki” it also makes me think “Christmas” (a la mulled cider), so that opens up some other drink options.

Regans’ Orange Bitters No. 6 – Great orange bitters, and it’s pretty popular in the D.C. mixology scene.  The nose is heavy on the cardamom and carraway, which I’m definitely a fan of…the orange peel is in the taste combined with the cardamom.  This should definitely be in your collection as your go-to orange bitters.

The Bitter Truth Creole Bitters – Initial smell I get on this one is fruit with anise.  Major flavor in this one is definitely the anise.  This review mentions fennel as well, which I get at the finish.  Both that last review and this one mention it as a replacement for Peychaud’s, which I’d go along with.  I’ll probably save my bottles of Peychaud’s for drinks that call for large proportions of it, while using this one in dashes.

Ilegal Mexcal Añejo – I bought this one with a specific cocktail in mind (The Beety Bastard by Gina Chersevani), but they’ve got a few others on their website that sound promising.  This is a small batch production (I’ve got bottle #840 of 1350)…more on that here.  I haven’t cracked it open yet, but based on the review here this may also be good as a sipping mezcal (the price also lends itself to that at $100/bottle).

Luxardo Maraschino – A bittersweet, cherry-based liqueur.  I primarily bought this one to make the Aviation and Martinez, but there are many other good options.  Founding Farmers has one called “Nice Coat!” with Bluecoat Gin, Maraschino, basil, lemon, and orange bitters.

Amaro Averna and Gran Classico – I’d compare/contrast these two together and with Cynar (which has a sweet start and more bitter finish than Averna).  The Gran Classico starts more bitter and less sweet but ends slightly less bitter than the Cynar.  I’m not a huge fan of bitter for bitters sake, so I’d go with the Averna as my favorite of these three…when mixed right though, all three have great potential.  Recently, I had Averna at The Passenger in the “Mother of Dragons” (it was Game of Thrones night).  Averna, grapefruit, Canton, orange bitters, garnished with FIRE…tasty.

The Targaryens would be proud.

I just attended a great course on bitters mixology.  The class was put on by Jesse Dean of Libations Bar School and hosted by the Spice and Tea Exchange in Georgetown…both of which I would encourage you to check out.  The Libations Bar School has some interesting courses, including an advanced mixology and molecular mixology offerings (who wouldn’t want to try working with liquid nitrogen behind the bar??)

After going over some of the background behind tinctures, extracts, and bitters, teacher Jesse Dean had us put together our own mix of bitters from the stock of the Spice and Tea Exchange.  The concoctions will be steeping for the next several weeks, at which point we’ll be having a cocktail night with the better mixtures.

Some people may think that making bitters is too complicated for them, but it can be as easy as taking a small, sealed container of over-proof liquor, adding a small amount of fruits, herbs, or other flavorings, usually including one ingredient categorized as a bittering agent, then allowing it to steep for a couple of weeks.  Make a few of these at a time and figure out which recipes work best for you.  Just make sure you label the jars with what you used…that way it can be reproduced later in larger quantities.

I’m going to keep the recipe for my group’s bitters under wraps for now, but it included a spice, a flower, some pepper, and a bittering agent.

Here’s a couple of shots from the evening:

Cinnamon and Grains of Paradise…just to show how easy it is to develop bitters.

A few varieties of bitters developed by Libations Bar School. I was a fan of the second one from the left…reminded me of allspice dram (or Christmas).

I’ll provide an update when we have the cocktail night…I’m looking forward to trying out the winners.

Made an evening out of trying some cocktail recipes.  Here’s two of the ones that stood out:

The Sour Hass cocktail is based on the recipe from Las Canteras Peruvian restaurant in Adams Morgan.

Having enjoyed this drink a couple times at Las Canteras, I went searching for the recipe.  I located this recipe for it over at the Connect to Peru blog, courtesy of Las Canteras:

Muddle the mint and avocado together, then add the pisco, pineapple juice, and simple syrup.  Shake with ice and strain into a glass.  Garnish with a mint sprig.

I changed up the recipe slightly by adding my homemade habanero-ginger syrup instead of plain simple syrup.  Came out smooth and spicy.  Goes great with Peruvian food.

It even looks smooth…

Next up is the Gunshop Fizz, created by some folks at Cure New Orleans, and posted at the Shake & Strain blog.  I learned about this one while researching the recipe for the Trinidad Sour (my current favorite).  Both drinks use bitters as a base (2 oz Peychaud’s and 1.5 oz Angostura, respectively), making them unique in the mixology world. 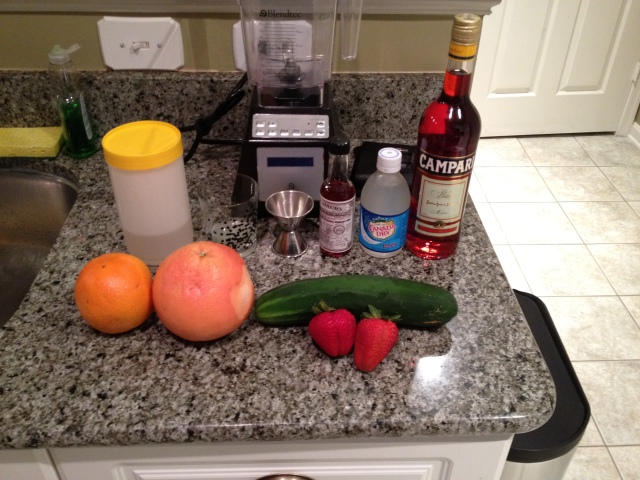 This one is a little complex…

This cocktail is complex:

Muddle everything but the Sanbittèr.  Set aside for two minutes, then add ice, shake, and strain (recommended to double strain through a cocktail strainer and a tea strainer – liquid should be thin).  Top with Sanbittèr.  Garnish with a slice of cucumber.

For one of the versions I made, plain simple syrup got itself replaced by that of the habanero-ginger variety, and Sanbittèr apéritif got replaced with Campari and club soda (essentially the same thing, just with alcohol).

I tried this four ways with another guinea pig tester.  The first used the Campari and soda…very complex flavors between the bitterness of the Campari, the sweetness of the strawberries, the citrus of the orange and grapefruit rinds, and the freshness of the cucumber.  The second just used club soda…this wasn’t bad either, and if you are not a bitter fan it might be the way to go.  Third method replaced the Campari and soda with Schweppes tonic water with quinine…this was the favorite.  The quinine bitterness is lighter than Campari and goes very well with the citrus notes of the drink.  Fourth method was with nothing added after straining.  This was a little sweeter than I’d prefer, but I can see some people liking it.  I could also see this being good blended with ice, and that would lighten up the sweetness. 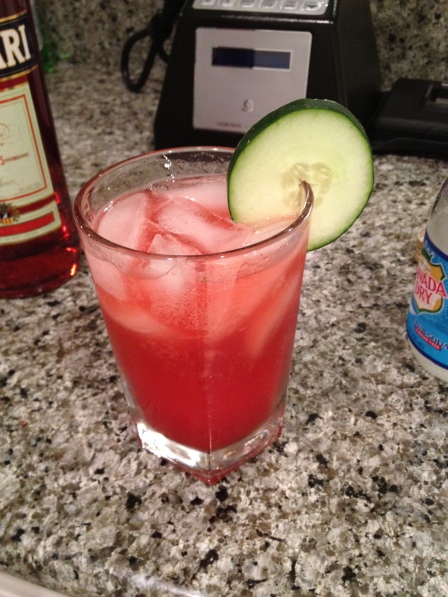 A tasty and complex drink. You put in some work for this one, but it’s worth it.