Bacon and beer (and shots of rye whiskey) go so well together.

I went to yet another great event at LivingSocial‘s 918 F Street – Bacon and Beer Tasting with Flying Dog Brewery and Founding Farmers.  For $19, we were treated to four small bacon dishes created by Chef Joe Goetze of Founding Farmers, four beers from Flying Dog, and a shot of rye.  Over the hour-long tasting, we were presented with various information on the beers and bacon dishes.

Here’s what we had:

We started off with the Snake Dog IPA (7.1%) and Turkey Bacon with Apple-Onion Confit with four-year Vermont Cheddar, followed by the Double Dog Double Pale Ale (11.5%) with BBQ Spiced Artisan Grilled Hickory Bacon. 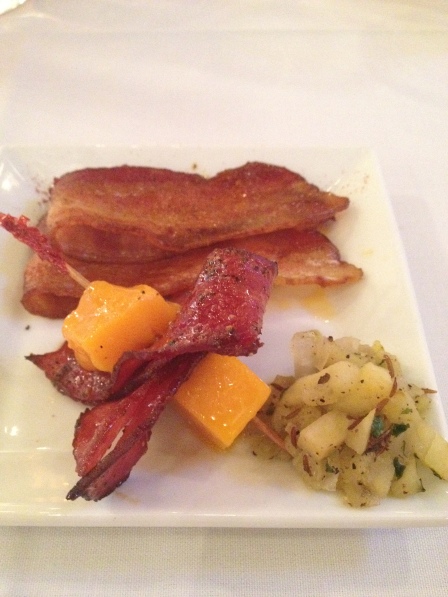 I especially liked the Apple-Onion Confit that went with the turkey bacon…it was made with caraway, yellow onion, Granny Smith apple, jalapenos, bay leaf, celery salt, and other ingredients. Really tasty.

After a short break, and a shot of rye, we started on the second course.  Pearl Necklace Oyster Stout (5.5%) washed down Black Pepper Maple Glaze Apple Wood Smoked Bacon with Danish Blue Cheese, while Horn Dog Barley Wine paired well with the Bacon-Wrapped Blue Cheese-Stuffed Dates (my favorite – these were delicious).

The dates were awesome…I may reproduce them for my next gathering.

Another great event at an excellent price.  This tasting appeared to be extremely popular…I think LivingSocial was having a couple of tastings a day.  As of the writing of this post, the deal is still available.  You can sign up for it here.

One comment on “Bacon and Beer Tasting at LivingSocial, 22 July 2012”